In June 2022, the Federation of Finnish Learned Societies hosted a PKP software sprint in Helsinki, Finland. During this sprint, PKP community members gathered to form several groups, with each group tackling a specific task. This is a summary of one such group’s work.

Editors are often busy and would benefit from a reminder of their assignments. But what would such an email look like? When should a subeditor be alerted of an outstanding task? This group discussed these questions, prepared an email template, and began working on the implementation. Shortly after the sprint, the email was merged into the software’s code and we expect this feature to be released with the next major version.

Editors are often busy and would benefit from a reminder of their assignments. Can we send them a regular email reminder showing them submissions that need their attention?

Managing editors often spend much of their time reminding associate or subeditors of their tasks. Because subeditors log into the system less regularly, it is more likely that they will forget to login. In such cases, a submission may linger for a long time in the system.

A regular email with a reminder of outstanding tasks will help subeditors stay on top of their submissions and reduce the amount of time that a managing editor spends coordinating subeditors.

This feature was requested by our community and is provided by other scholarly workflow tools. But what would such an email look like? When should a subeditor be alerted of an outstanding task?

This group discussed these questions, prepared an email template, and began working on the implementation.

Our group began with a discussion about what this email should include. Should it be an overview of all of their assigned submissions? Or should it be a short list of those that need their attention? Should we differentiate between urgent and outstanding tasks? How often should it be sent? Will it become more email “noise” that editors will ignore?

We decided that the email should focus on submissions that need their attention now, but we disagreed about whether to include all of an editor’s assigned submissions. Some of our participants had experience with other editorial systems, and mentioned that they used a red-yellow-green stoplight system to identify each submission’s status.

Finally, we weren’t sure about how often we should send the email. We settled on between every two weeks or a month.

We couldn’t answer all of our questions as a group, so we decided to put together a few example emails and recruit sprint participants for feedback. This turned out to be very helpful.

Please click on the image itself to see a larger version. 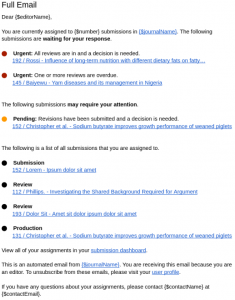 Our test participants pointed out that the distinction we were trying to make between Urgent and Pending tasks was confusing. We agreed to group them all together and abandon the stoplight system.

They disagreed about whether or not to include all of an editor’s assigned submissions, just like our working group. And they confirmed our suspicions that journals have very different editorial rhythms. Some will want the email weekly. Others will want it monthly. We’re not likely to find one schedule for reminders that will work for all journals and disciplines.

Finally, we began work on adding this feature to OJS, OMP and OPS. We applied changes to our testing template and then converted it into HTML code that can be shown in an email. And we added a scheduled task to the system to send this out on a regular basis.

Our code is currently waiting for review. We expect this feature to be included in the next major release, version 3.4, which is expected later this year. Here is an example of the email in a test journal.

Please click on the image itself to see a larger version. 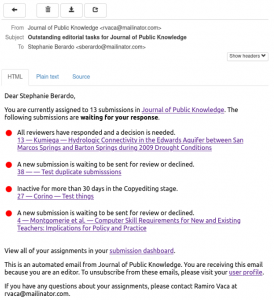 We weren’t able to implement some of the things that we discussed. The email is sent out monthly, but we think this should be configurable by each journal or editor. Currently, the email reminders don’t include any information about discussions. We wanted to include submissions where a discussion has not been replied to or closed for 30 days, but we ran out of time.

We also wanted to include positive language in the email to thank the editor for their work, which is often unpaid. We drafted the following text:

We have published {$number} submissions with your help. Thanks for your contributions to this journal. If you have any questions about your assignments, please contact {$contactName} at {$contactEmail}.

However, we ran out of time and weren’t able to implement this.

Our group benefited from being a mix of software developers and editorial/publishing professionals. It was a good reminder of how useful it is to bring our community together to help build our software.

Photo below taken at Helsinki by PKP’s own Jason Nugent 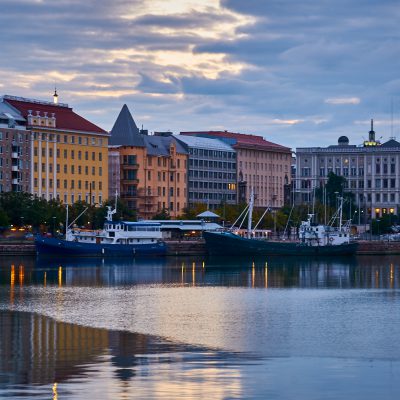