In June 2022, the Federation of Finnish Learned Societies hosted a PKP Sprint in Helsinki, Finland. The Sprint involves PKP community members forming groups to tackle PKP software and support. This is a summary of one such group’s work.

A scholarly article may have contributors of many types, but historically only authors have been recognized. Taxonomies such as the CRediT Contributor Roles Taxonomy introduce standard ways to credit other kinds of contributions, and CRediT in particular has emerged as a leading contender for widespread adoption.

CRediT isn’t perfect for the OJS/OMP/OPS user community, lacking in particular a distinction between Authors and Translators. However, adding support for this standard is an important improvement to the software’s metadata capabilities.

Beyond simply adding support for the 14 CRediT contributor roles in contributor metadata, a complete solution to improved contribution management in the software will involve other subjects such as privacy and workflow decisions around who controls data entry.

The group work on this subject at the Helsinki 2022 sprint explores these issues, and begins an implementation of CRediT support for OJS as a plugin.

This group’s goal was to explore the implementation of machine-readable contributor roles in Open Journal Systems based on the CRediT Contributor Roles Taxonomy.

While a journal’s Table of Contents typically credits the article’s authors, there may be many kinds of contributions to a research study (or preprint or monograph) that deserve credit, represented by the work of translators, coders, consultants, and many others.

For this additional credit metadata to be useful, it must be distinguishable from the article’s authors, and some kind of (machine-readable) vocabulary must be shared so that other systems can understand the data. This data might include the contributor’s role, as well as ranking or proportion.

Issues of contributor credit are at the heart of career advancement and tenure and promotion, and relate to some forms of academic abuse (e.g., pressure on junior scholars to undeservedly grant primary authorship to more senior scholars) and privacy and authentication (e.g., GDPR and 3rd-party claims). Thus it’s important to choose a careful strategy.

Lately, the CRediT Contributor Roles Taxonomy has received a lot of attention, including uptake by CrossRef and ORCID. This taxonomy includes 14 roles that describe a comprehensive range of contributions to a study.

Although it is well known and widely recognized, CRediT taxonomy is not the only option; the group identified several others, such as:

OJS (and other PKP software) does not yet support CRediT or any other machine-readable contributor role taxonomy, despite a longstanding github issue entry on the matter.

It is possible to create custom roles in OJS/OMP/OPS (these are called “user groups” in the codebase and “roles” in the user interface). These serve both workflow and publication purposes. There is a built-in set of 18 roles, of which two (“Author” and “Translator”) are relevant to this discussion. These can be customized or deleted, but as far as we are aware this is not common practice in the user community.

There are several minor areas of the software where these roles are mapped onto other standards in a way that could be improved:

Of the taxonomies the group reviewed, CRediT has the most momentum. However, it is a high-level taxonomy, and we identified important use cases where CRediT was missing an appropriate role or lacked fidelity in distinguishing two:

While the other taxonomies we reviewed often included the roles we saw as missing in CRediT, they were often far too specific, including many dozens of roles. If this is a list we foresee presenting to contributors to allow them to self-identify, the quality of metadata will likely decrease as the number of options increases.

It is often not clear whether taxonomies are officially translated into other languages. The JATS4R recommendation for CRediT includes URIs for the CRediT terms, which means support for translations is possible; there appear to be 13 “unofficial” translations of the taxonomy by ORCID, available by selecting a language from the dropdown on the ORCID CRediT page.

We decided that none of the taxonomies we identified was a “silver bullet”, and that it would need to be the journal’s decision whether to use one or more, and if so, which. It is our hope that CRediT will receive more uptake – it appears to be a clear leader – but that its shortcomings are addressed by the refinement of the taxonomy and better explanatory materials.

The group frequently discussed issues of power and incentives in defining a list and order of contributors. Broadly speaking, there were two sources of debate:

(2) Scholarly power structures have their own personality, and should be considered in implementing technical standards – both for aspects that need to be supported, and aspects that should be challenged or rejected.

The group discussed several examples of unethical behaviour in scholarly publishing, such as supervisors exerting pressure on early-career scholars to order the authorship in ways that favour supervisors regardless of when early-career scholars contribute more than supervisors, or adding scholars to the authorship list who were not involved in the research. We considered scenarios where the submitting author was the first author or not, and scenarios where the submitting author was a senior academic or not. We considered the routes for recourse should a conflict arise.

OJS does not currently support a GDPR-friendly invitation process for co-authors, but this is already on the development roadmap for the software, which his group certainly supports. This group recommends that co-authors only be identified by the submitting author, and that each be given the opportunity to classify their contributions along with the invitation. Disagreements about roles credited should be brought to the journal’s editor, if they cannot be resolved by the authors. The editor is already responsible for the submission’s metadata.

A pure invitation process will not work well with back-issues (e.g., deceased authors). Thus another process whereby a submitting user has the authority to enter third-party author information will need to continue to be supported.

While the group began the implementation of a CRediT plugin for OJS, at the time of writing it is incomplete, but work is expected to continue. Its current target is the forthcoming OJS/OMP/OPS 3.4.0 release. We hope that CRediT support can be included as an officially supported option, whether for its own use or as a template for using other credit vocabularies. If you are interested in following this work, or contributing to its development, please make use of the tools in Github (above) or the PKP Community Forum.

Our thanks to the Federation of Finnish Learned Societies for hosting the sprint, and to the PKP community, both in attendance at the sprint and elsewhere, for their valuable guidance.

The Helsinki 2022: Contributor Roles sprint group generated the ideas contained in this blog post, and the post itself was written by Alec Smecher, although credit goes to everyone in the group including Esko Clarke Sario and Frederique Belliard.

Below: photo taken in Helsinki by PKP’s own Jason Nugent 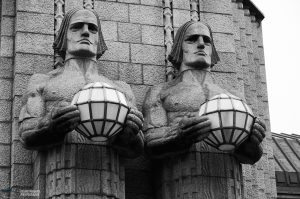