This was the first time many attendees had a chance to interact with the newest release of Texture, which had only been completed a few days prior to the sprint, and to an extent the goal was to figure out whether they liked the direction the editor was taking, whether they could envision using it to clean up author submissions, as well as whether they could clearly articulate the benefits of getting JATS XML to their respective publishing stakeholders.

We also reviewed the current workflow of the OTS plugin for OJS3 — again, some attendees present hadn’t had much of an opportunity to experience OJS3 prior to now, so to a significant extent we were interested in exploring the workflow in general and figuring out where our current assumptions around the plugin design didn’t make sense for novice users, and which aspects they were excited about.

One member of the group who had already been using the Open Typesetting Stack on his own prior to the conference instead decided to expand our known-good metadata support; OTS supports POSTing a JSON file of known-good metadata along with an article submission, so that if you already have properly first/last separated author names, or publisher details like an ISSN which aren’t contained in the document themselves, they’ll still be merged into the JATS front matter, replacing the parsed result if there is one. The OJS3 plugin is already designed to use this functionality — the server-side feature was added in the first place in order to take advantage of article titles, etc., being present within OJS — but neither the plugin client nor the OTS server were aware of *all* the metadata available within OJS prior to now, instead just using a cherrypicked selection of common fields. Our lone sprint member decided to expand metadata support on both the OJS and OTS side, and with help, was able to get this work merged several weeks later.

The rest of the group provided valuable feedback on OTS, the OTS plugin for OJS, and Texture in their current incarnations, some of which has already made it upstream.

We will continue to perform gradual UX improvements on Texture and the OTS plugin, and ensure that as many people as possible are able to work with them easily and effectively. 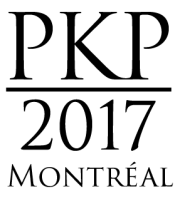